Think twice before burn your nation 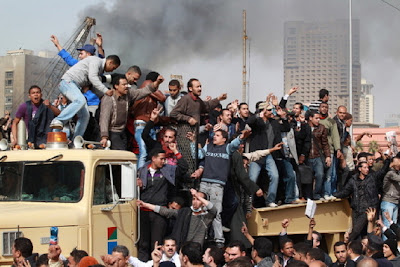 Dear Brothers,
ChangesDo is calling all of these three (Yemen, Egypt and Tunisia) nations to think twice before burn your own nation by own hands,
Islam is our religion which is totally against unwanted crises.
Only Islam is guide the world how approach things to be made even changing a politician or president for a country.
When we get back to history of the best politician in the world, Prophet Mohammed (peace be upon him), he become a moral political leader with Madeena political constitution without any protest or rally.
We, the only one community authority to proclaim the peaceful life and we have live with morality.
The solution can be with a negotiation or an election to change dictating government.
Please come together to maintain the nation with silent and harmony by following Islamic guidance.
Yemenis rally against president Saleh
Thousands of Yemenis, apparently inspired by events in Tunisia and Egypt, staged a mass demonstration on Thursday calling on President Ali Abdullah Saleh to quit after being in power since 1978.
"Enough being in power for (over) 30 years," chanted protesters in demonstrations staged by the Common Forum opposition in four different parts of the capital Sanaa.
In reference to the ouster of Tunisian president Zine El Abidine Ben Ali, the demonstrators said he was "gone in just (over) 20 years." for more.......
Egyptians brace for Friday protests as internet, messaging disrupted
ElBaradei, the Egyptian Nobel laureate, said people have taken to the streets because they "realize the regime is not listening, not acting."
"The barrier of fear is broken," ElBaradei said after he arrived in Egypt from Europe on Thursday. "And it will not come back."

Now ElBaradei has said he will take part in the protests and passed along "advice to the regime: It's now the time to listen to the people. Make an innocent collective change."

He called for demonstrations to be peaceful and for the government of President Hosni Mubarak to stop detaining and torturing people. He said that a violent response from the government is "counterproductive" and that the regime should promote democracy and social justice. for more.......

Protesters are demanding politicians from the old regime stand down
Tunisian police have clashed with protesters during an anti-government rally near the main government compound, witnesses say.
Some of the protesters had apparently tried to breach barricades, and riot police responded by firing tear gas.
Many of the protesters have been camping out near the prime minister's offices demanding all politicians with links to the old regime step down.
The former president was forced into exile earlier this month.
A countrywide uprising sparked by concerns over the economy and corruption ousted long-term leader Zine al-Abidine Ben Ali, who fled to Saudi Arabia on 14 January.
Prime Minister Mohammed Ghannouchi, who has been in his post since 1999, formed an interim national unity government and promised elections. for more....
Posted by Issadeen Rilwan at 1/30/2011
Email ThisBlogThis!Share to TwitterShare to FacebookShare to Pinterest

Super advise,
it should be informed.