I found that one more dynamic and world-renowned personality, a hero of the Muslim World that is non other than
Sheikh Ahmed Hoosen Deedat.

He was Born on the 01 July 1918 in the Surat district of India in 1918. His father emigrated to South Africa in 1927 with him. Ahmed Deedat was a very bright student and excelled in school. Lack of finance interrupted his schooling and at an early age of 16 he took on the first of many jobs in retailing and short assistant. 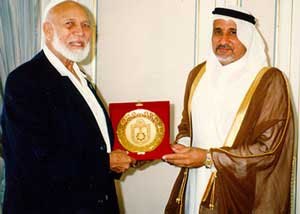 After reading a book called Izharul Haq – The Truth revealed, a book about a debate with Christian Missionaries in the then British India, Sheikh Deedat was spurred on in the direction of Dawah – Islamic Missionary Activity to halt the tide of the then Christian onslaught against Islam.

Over the next four decades, he immersed himself into a host of activities. Conducting Bible classes, lectures and debates the world over. He established the first Islamic Seminary in Southern Africa to train propagators at Assalaam educational Institute - Braemar. 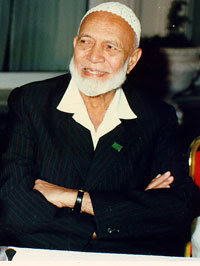 He is the founder of the largest Islamic Dawah Organization in the world, the Islamic Propagation Center International and became its president.

He has published more than 20 books and distributed millions of copies of FREE literature and pamphlets the world over. Many of Sheikh Deedat’s publications have been translated into the many different languages of the world : Russian, Urdu, Arabic, Bengali, Bangladeshi, French, Amharic, Chinese, Japanese, Mayalam, Indonesian,, Zulu , Afrikaans, Dutch, Norwegian amongst others.

He delivered thousands of lectures all over the world, crossing all the continents and successfully engaging some of the biggest names in Christian evangelists in public debates. Sheikh Deedat’s debates and lectures are available all over the world in the various languages in Video and DVD format.

His career in the field of Comparative Religion took him across all five continents and dialogue with the heads of the Protestant world in America and the late Pope John Paul.

So fearless was his stand in defending the truth that Sheikh Deedat was refused entry into France and Nigeria on the pretext that ‘ he would cause a civil unrest’.

Sheikh Deedat also received a personal phone call at the IPCI from former President Nelson Mandela who was in Saudi Arabia at the time, congratulating Deedat for his international icon status in the Muslim World.

He was awarded the prestigious King Faisal Award in 1986 for his sterling services to Islam in the field of Propagation.

May Almighty Allah bless his soul, accept his efforts for the cause of da’wah and grant gracious patience to his loved ones during this trying time.