Cannibalism – People Who Eat Other People

Of course, the introduction of civilization, the very thing that separates us from the animals, makes it impractical and morally objectionable to kill and eat your kinsmen. When living in a group structure it is much better to let your friends and family live so they can help you carry that massive mammoth carcass back home. But what if your intended victim is not a member of your tribe? By making a meal of a rival tribesman you not only rid yourself of a troublesome neighbor, you also get yourself a family sized bucket of tasty man flesh as a special treat for the kids. This is one widely accepted answer to the question of where all those pesky Neanderthals went. That’s right, we ate them (or some of them at least – the rest probably ate each other).


Our prehistoric ancestors can hardly be called civilized, however, and things have changed greatly since the dark days before KFC. Most of us now agree that the idea of eating another person is grim and stomach turning but, historically speaking, not all human cultures have shared this view. Many cultures have used cannibalism simply as a convenient way to dispose of the dead; others have even embraced it as a religious and ceremonial practice. The Aghori of India, for example, believe that eating the flesh of a recently deceased person (or not so recently deceased as the case may be) will give them magical powers. The Aghori, an extreme and widely condemned Hindu sect, get their kicks by removing bodies from cemeteries and funeral barges, sometimes eating them raw.
Here are some examples of cannibalistic societies in recorded history:
1. The Carib 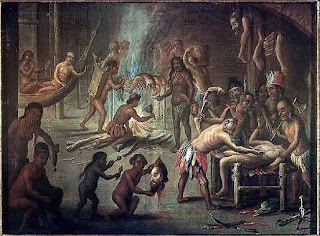 The Carib people of the Lesser Antilles not only had the entire Caribbean Sea named after them; their name is also the origin of the word cannibal. Christopher Columbus was the first to report cannibalism among the Carib, whom he referred to as the Caniba (a mispronunciation of ‘Karibna’, the Carib word for ‘person’). Following this many Europeans formed the belief that the Carib practiced general cannibalism but this was not true, the Carib practiced ritual cannibalism and only ever against their enemies.

Any conquistador to stumble across a society of cannibals would have been utterly thrilled. At the time it was considered a Christian’s duty to punish and subjugate any society known to practice cannibalism. This led to many tribal cultures in the Africa and the Americas being falsely accused of cannibalism and may have precipitated the slave trade. 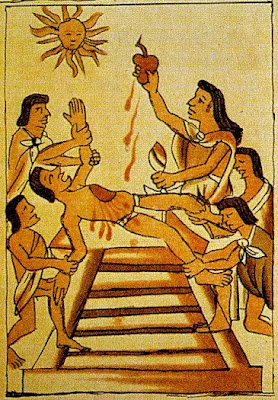 The Aztec were without a doubt the most brutal society in pre-Columbian America. They made thousands of human sacrifices each year, ceremonially slaughtering their victims in a variety of grim ways. Typically, victims had their beating hearts torn out but being burned alive was also quite common. So what did the Aztecs do with the bodies after the party was over? While there is no academic consensus on whether or not the Aztecs practiced cannibalism it stands to reason that they did. Cannibalism, while not necessarily a cultural norm, was not uncommon in pre-Columbian societies and many scholars argue that the Aztecs would have thought little of rummaging through the temple bins for a snack. Others theories that human flesh would have been a delicacy eaten only by the aristocratic elite. The lack of animal proteins in the Aztec diet would have made human flesh a healthy and desirable treat, especially considering the novelty value. 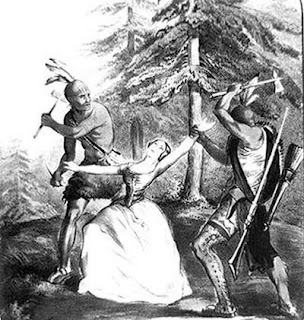 There is evidence to suggest that many Native American peoples, including the Sioux, the Cree, the Comanche and even the Iroquois, may have once practiced ritualistic cannibalism. Of course, this is a highly charged and highly political debate. Many argue that the accusation of cannibalism is an attempt to depict Native Americans as brutal and uncivilized peoples, thus justifying their subjugation. However, some argue the opposite, saying that Native American cannibalism has been denied or even covered up by some historians in the name of political correctness. Whatever the truth, it would seem that cannibalism was once practiced by at least some Native American cultures, particularly those of Texas, New Mexico, and Arizona. The now extinct Karankawa of Texas are a prime example. In 1768 a Spanish priest witnessed and recorded a Karankawa ritual in which a captive was tied to a stake. The Karankawa danced around the man, occasionally slicing off a piece of his flesh to be roasted and eaten in front of him. 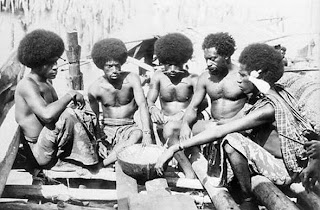 While no single society in Africa can be cannibalistic, the practice of cannibalism in Africa throughout history has been frequent and widespread. Even today there is thought to be an underground trade in human body parts. Some believe that eating certain human organs and body parts will have a magical healing effect and some witchdoctors are thought to run black market operations, actively harvesting, proscribing and selling bits of other people as supposed ‘natural treatments’. As a result, thousands of people across Africa go missing each year after falling prey to the collection gangs. Most cruel of all is the fact that many victims are not killed but have parts of their bodies removed whilst alive. Sickeningly a human penis can be sold as a cure for impotence but there is a market for everything from a victim’s fingers to their lips.

Cannibalism has also been reported in several recent African conflicts, including the Second Congo War and the civil wars in Liberia and Sierra Leone. It is usually directed against social or racial groups that are thought to be vulnerable, such as the Congolese Pygmies. 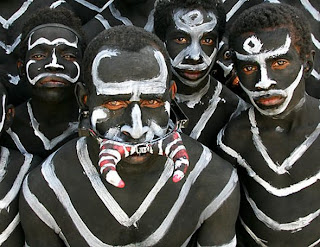 Cannibalism seems to have once been widespread in many Polynesian and Melanesian cultures. For example, Fiji was once known as the cannibal isles. One Fijian tribal chief claimed to have eaten 875 people and boasted of his achievement.

The native inhabitants of the Marquesas Islands in French Polynesia were also thought to be cannibals. When a waling ship capsized near the islands in 1820 the captain decided to lead the survivors 3000 miles upwind to Chile rather than risk taking on the cannibals. Ironically, the survivors themselves later resorted to cannibalism as a means of survival. 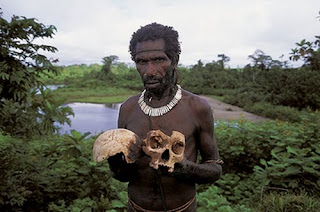 The Korowai of Papua, Indonesia may be the only tribe left in the world to practice ritual cannibalism. It is said that they kill and eat members of their tribe that have been convicted of witchcraft, although this may just be a ploy to attract tourists. Apparently the brain is most tasty part of the victim’s body and is eaten raw while still warm. Korowai houses are built high on stilts. It is thought that this design evolved through a need for protection, owing to the once rampant practice of cannibalism on the island. Members of the Fore tribe, who live on the opposite side of the island to the Korowai in what is now Papua New Guinea, are thought to have contracted the degenerative brain disorder Kuru (also known as laughing sickness) through the ritual consumption of their own dead tribesmen.